Another day, another dawn, but somebody forgot to tell my body that what has gone has gone. I feel pretty bad from yesterday’s alcoholic Molotov concoctions and have been up since 2.30 a.m. unable to sleep with jet-lag and over exuberance. By the morning I have become an expert on Seattle Weather reports and American News but I’m feeling a little better and am grateful for those few bottles of water in my room. I decide to get in-touch with last nights partners in crime and we arrange to meetup at Lowells to have some breakfast. This is good for me because I have wanted to try breakfast at Lowells for a long time having only ever eaten there for dinner.

One of our party arrives at Lowells a little worse for wear and only manages a Orange juice 🙂 to my amusement. It is usually me in this position so I’m going to enjoy the fact that it is not to the full. I order a huge fry-up and Coffee and ensure that our suffering colleague is aware of how much I am enjoying my breakfast… I am nice that way.

We are all scheduled to attend a 10 O’Clock meeting at the Convention Center for SQLSaturday Leaders but first had an hour to kill. We decided to walk up to Starbucks Reserve Roastery & Tasting Room where I had a lovely cup of tea. For any coffee connoisseurs out there I thoroughly recommend paying this place a visit and avoid the tourist trap at Pikes Place Market, because this coffee shop is a site to behold with its lovely decor and slightly over the top exuberance, and not to mention its lesser mass market offerings.

I make my way down to the meeting at 10 a.m and I confess that it seems we are listening and participating in the same discussions as last year by the same people- “how do I get sponsors for my SQLSaturday” or “what do you guys want from us” or many other  issues that quite frankly will result in wasted minutes and hours when I think much of this stuff can be aired over a forum to enable us to discuss the real issues facing the long term future of SQLSaturdays. It is also quite clear that all sponsors present favour the U.S. marketplace and not a single one of them references a European agenda in their feedback – a point that all continental leaders failed to mention. I also raised the point regarding branding of SQLSaturday suggesting that each event should be allowed to have their own corporate identities, but again the answer leaves me feeling that there is a complete lack of understanding of European requirements. Even the farthest U.S states are culturally more alike than the closest European countries. It appears to me that there is a fear of watering down the SQLSaturday brand when I think my suggestion would actually do the opposite.

Next up was the Chapter leaders meeting. I was originally going to skip this, but for my pains cannot help but want to be involved. I made the wrong choice and again the meeting played out like the first, with similar questions and similar answers to the SQLSaturday Leaders meeting (and similar people asking the questions).

Late in the evening I attended the Pure party at the Taphouse and while it was very quiet when we first arrived (they were just setting up), after a hour the place was rocking. They had some really tasty food on the buffet and I made sure I had a nice selection for my tasting :). I’d like to thank Argenis (web|twitter) and his Pure colleagues for organising this great meetup and inviting me to it. 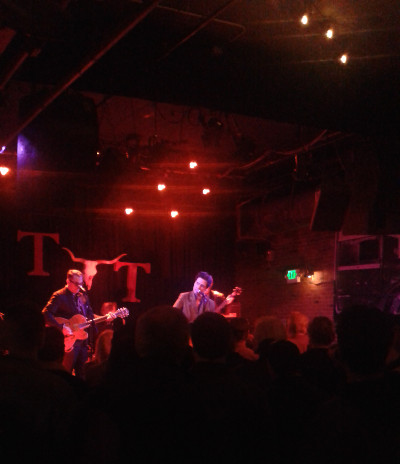 Finally the last stop of the night was at the rather intimate Tractor Tavern in which we were there to see Tav Falco and support act Deep Creep. While the support act was really good (but not quite my type of music), Tav Falco (and band) were great. I loved their bluesy sound and Tav’s eccentric moves on stage reminded me strongly of David Byrne from Talking Heads. A big shout out goes to Karla (web|twitter) for inviting me to this gig and it was great to be doing something different at the Summit for a change.

While we did end up back at Denny Cherry’s Karaoke party post gig, I decided to call it a night soon after arriving and walked back to the hotel. I was tired and I am not the spring chicken of Summits past.

This entry was posted in Community, SQLServerPedia Syndication and tagged PASS Summit. Bookmark the permalink.