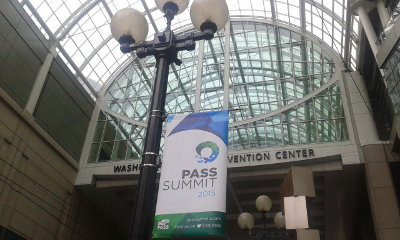 I wake at 3 a.m. to find my plan of preparing my sessions into the late evening in tatters having completely crashed and burned after the huge meal the night before. My main session is scheduled to be delivered at 8 a.m so that means I have approximately four hours to try and nail it. First I get showered at dressed, and then start running through my slide deck and correct error after error. Once I am happy with the deck, I read through my notes and study each slide until I am happy that I understand each one. I run through the demos and complete main session preparation before returning back to the lightning talk. After working four solid hours I head to the Convention Centre so that I can grab a quick bite to eat and setup in my room with enough lead time before the session starts.

While nibbling on a tiny piece of breakfast (I don’t like eating before a session) I am joined at the table soon after by Chris Yates (who I met yesterday) and we chat for a couple of minutes before saying our goodbyes and me heading onto my session. I am hoping that unlike last year, my room will be small and intimate but upon arriving I see that it is quite the opposite. Thankfully there are smatterings of attendees already, so I can tell that the turn-out is going to be ok (or at least much better than in 2014).

I setup my session and switch to duplicate screen mode in order that my demos will be visible to the audience, and then get my slide deck up. Virtual Machines are all started and working fine, so the only hurdle now is to compose myself, calm my mind and ensure that I get clarity on the next three minutes of intro I am going to start with. For me, a good presentation beginning is usually key to a good ending, and should I be clumsy at the start then it will be an uphill battle from that point on.

So I make sure I welcome the audience, give them a very quick set of reasons to stay AND reasons to leave, and try not to waste any more time on all this than necessary. Often I tend to worry about these opening minutes more than anything else in the presentation and have been guilty at times of going too slow across the first five slides. I know we have a lot to get through today so I attempt to avoid waffling, avoid talking about myself and get straight to the point. Things are moving fairly well now, and I am happy that it is all going to plan – that is until I arrive at the first demo. 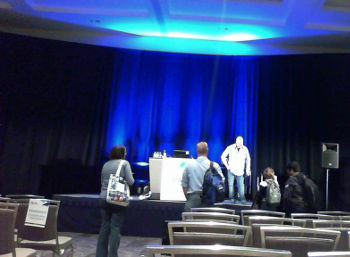 Beam me up Scotty! Warn-out after session but pleased we have more questions

Upon entering the first demo, I find that screen duplication is for some reason is not now set correctly (despite doing so at the start) and my attempts to flick the screen into duplicate (Using Win key + P) is not working. Not only have I lost video to my laptop, but the main projector screens are going nuts and look like a crashed Linux boot screen. During this time I try to stay completely calm, apologise to the audience and attempt to make the change again -to no avail. I look for the room assistant but cannot see her, so I let out a little joking yelp for help :). I’m not sure where she was hiding, but suddenly she appears from behind the screen and attempts to help fix the problem. Despite us both trying every trick in the book, we both quickly realise that this problem is not going to get fixed any time soon. We have managed to get video displaying on the screen ahead of me (the screen on the floor) and also on the main projector screens (but still no output on my laptop). Even though I have only lost a few minutes, I decide that enough is enough and grab my wireless mouse and jump down from the stage, near the screen on the floor and attempt to run through the first demo. This is far harder that it might sound, and after successfully navigating through the first section of my demo -with help from the audience to click the right buttons (my eyesight is struggling with the resolution), I decide to talk through the remaining sections and explain what we would expect to happen and why.

Now back on track (and still without a screen on my laptop) I am forced to present from the floor screen as my reference, despite no longer having my PowerPoint presenter notes available, I continue with the session as best I can, and it runs as  smoothly as I could hope for. By the end of the session and despite some technical difficulties, I am happy with the session and audience interaction has been quite good. What was particularly pleasing was a bunch of people coming to talk to me at the end (always a good sign), and one chap thanked me for ploughing through the technical problems. I was also pleased to close the session almost dead on-time.

Lightnings-are-a-frightening! Me getting my NOLOCK mojo on

I only have the lightning talk left to present now, so head back to my hotel room for a quick run through my small deck of slides, notes and demo. I only have time enough to do this once and so I am heading back to the Conference Center to find the room I am about to present in. I was first up to present, with Rob Volk needing to present right after me (due to his session related gags to mine). My session went fairly well considering its gestation period and birth-date, but there is definitely scope for improvement and a couple of snags to be ironed out. One big take away from this Summit (and the last few SQLSaturdays I’ve presented at) is that it is time to upgrade my Laptop AND Surface to help with transition and Video connectivity issues -so this will be high on my list when I get back. Congratulations goes to Rob, Tim, Andreas and Murillo for their excellent Lightning talks and it was a pleasure to be part of this session with them. 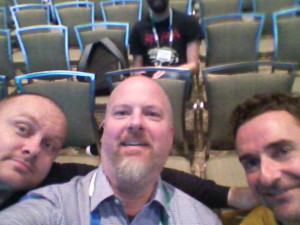 Straight after the Lightning Talk the “Swarm pack” headed straight to the Tap House for lunch. Sadly our waitress gave us perhaps the worst service I have ever seen and it took 30 minutes even to be served a beer! After finishing the meal we headed into Uwe Ricken’s (web|twitter) session Change Data Capture (CDC) Case Study and Checklist and he proceeded to deliver an excellent session. I know Uwe really well, having got to know him from other events and also as a speaker to my own. Not only is he one of the nicest guys you can meet, but as a fellow MCM, I respect this guy immensely and his depth of knowledge on SQL Server is obvious upon first speaking to him. Uwe did something in his session that Germans are not supposed to be able to do… HUMOUR!

Editors note: I am beginning to think that the stereotype of Germans not having a sense of humour is grossly exaggerated -especially after getting to know Oliver, Tillman, Kostja, Gabby and Uwe very well. But perhaps they are the exception to the rule 🙂

His presentation was riddled with one-liners and high-jinx and I really enjoyed it. Having recently been heavily involved in a CDC proof or concept project, I was probably very prepared for this session. The only thing I think was not covered by the session was the use of CDC in HADR solutions, but to be honest that would probably have required a half day session to deliver rather than 75 minutes.

Not long after Uwe’s session we headed over to the final of Speaker Idol of 2015. The first session I saw, the speaker was understandably very nervous but did a good job -like all the other candidates. Sadly the winner of the competition was the presenter of the one and only session I missed (typical!), but I was told it was well deserved.

As the end of the last official day in Seattle drew to a close, I and the usual suspects headed to the Local 365 Cafe and things went well at first (service was good) -up until the entire PASS conference team turned up to their pre-booked tables. Not sure of the odds of us going to the same restaurant as their end of Summit get-together, but we did. And upon their arrival our service almost disappeared! Once we finally did eat, the food was ok but very expensive. One point of amusement came when Jens received his bill and found that he now had $100 less than he did before it arrived!!! 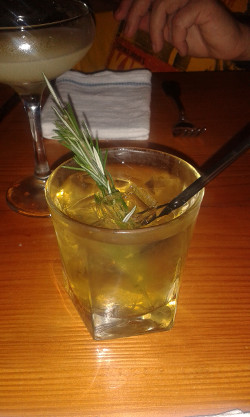 Not the nicest drink I’ve ever chosen

The only real sour point of the evening came at the end when I parted company with everyone. I started to feel really unwell all of a sudden and was now getting really really bad stomach pains and felt sick. The only thing on my mind was getting back to my hotel room as fast as possible which grew harder with each step. Ironically, just before I reached sanctuary, I bumped into Wendy Pastrick (web|twitter) and a group of others who stopped me to say hi and ask me what I was doing tonight. I almost had to push past in my mad rush to get to my room before I collapsed, and sent my private apologies to her later when I was feeling a little better -so sorry again Wendy!

Thankfully I suspect my pains and illness was related more to tiredness and overindulgences during the week but by morning was nearly 100% recovered. Overall this was a fantastic Summit, and I am very grateful that I was allowed to play a small part of it and hope you have enjoyed my 7 Days Of PASS series.