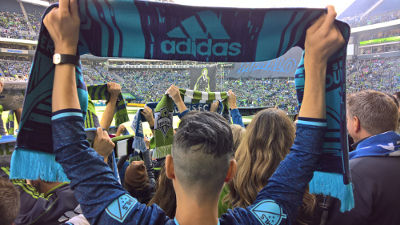 After arriving the day before, the threat of jetlag was always going to be there, but I thankfully managed to sleep until 4am and snoozed for a further hour. I started the day looking forward to the return of Mourinho to Stamford Bridge, but this time he was leading a different team (Manchester United). I was of course hoping for a Chelsea win, but my biggest challenge was trying to find somewhere to watch the match. My problem was that the game would kick off at 9am (Seattle time), so a sports bar wasn’t possible, so in the end, I found a dodgy streaming site which kind-of did the job. Four-Nil to Chelsea and I was a happy man!

Shortly after the game had finished, I met up with Craig Ottley-Thistlethwaite (b¦t) and Richard Douglas (b¦t) again and we headed down to the CenturyLink Field stadium in order to see the Seattle Sounders game. In a strange piece of coincidence, this was against the exact same opponents as last year (Real Salt Lake), so I was expecting a similar result. Before we hit the game, we checked into the Elysian Fields bar for a swift half and then promptly headed to our seats. While there was not enough “playing the ball” by both teams and too much lumping it in the air, I still enjoyed another Sounders win -this time 2-1 to the hosts. 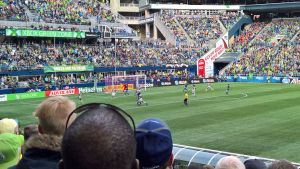 During our walk home from the match, we stopped off at Doc Maynard’s Public House (the location of the Seattle Underground tour) to wash down the match beers with some Seattle Dry Cider. After Craig demonstrated his drinking credentials, we then headed back into Pike for our obligatory visit to the Tap House to grab some food and drink before I headed back to my room. Within minutes I promptly collapsed in an exhausted heap on my bed as the effects of a pseudo Snake-Bite took hold of my body.

Just another day in Seattle!