Yes before you say it, I know SQL Server Integration Services is “old technology” but a lot of people are still using it, and in many cases are either still developing against it, or are looking to integrate/ migrate with other burgeoning technologies such as Azure Data Factory. In other words, if you are not currently using SSIS then this post is probably not for you -otherwise read on.

If you are still one of the lucky ones to still be using SSIS, I thought it would be worth publishing these comprehensive notes taken from a session titled “SSIS Data Flow Performance Tuning” delivered at SQLBits 8 (Brighton) by the then “SSIS guru” Jamie Thomson. Notes have timings (in mins and seconds) against them, which correlate directly with the presentation times. The video is still available and can be downloaded from the SQLBits website so you can watch it (if required) and use the timings to follow along.

0m45s. Buffer memory is an area on memory for SSIS data flow components. It does not move or change shape. Buffer is created with all columns that could be used rather than the ones that are used. Therefore using derived column components does not change the shape of the buffer.

2m. Data in a buffer can be changed/overwritten rather than new rows needed.

A buffer is a collection of many rows in memory.

A buffer is populated by the source adapter and has a certain number of rows, and that is what is operated on as a single unit of work, before being passed onto the next buffer in the data flow.

4m37s. SSIS dataflow made up of components (aka transformations). There are two types of transformations – synchronous and asynchronous.
Synchronous components are ones that consume a data buffer and might even transform/ change the data in some way, but will then output and pass that exact same buffer onto the next component to do its work on. Basically, this is an efficient way of consuming the data. The crucial point is that the output buffer memory address is exactly the same as the input buffer memory address.

7m05s. Synchronous components output the exact number of rows inputted. They are generally very quick and use the same buffers for IO. Examples are: derived column, conditional split, and multicast. In the case of a conditional split, even if rows don’t match the condition, they are still outputted but are excluded from the input of the next components (they are classed as “dangling rows”).
Multicast outputs are not duplicating rows for inputs (although logically it does). Instead, pointer magic is used.

8m33s. Asynchronous components create new buffers, have differently shaped (row count or column count) IO buffers, and can have different numbers of rows for input and outputs. Are usually slower. Examples are the aggregate and sort components. 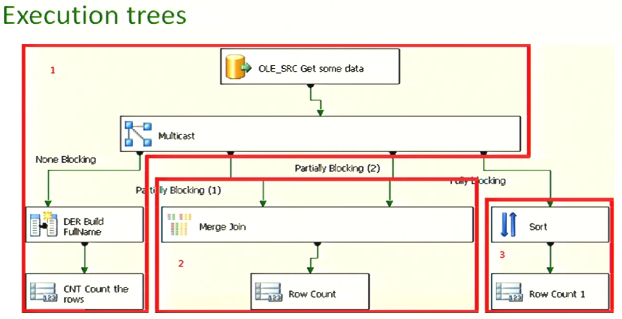 Buffers never actually move, they are either owned by a specific component or a copy is made (depending upon the component type).

15m. The Data Flow Task is performant by design without tuning or optimization and settings generally deliver great performance. For example, you are usually not going to get any performance improvement by tweaking the number of rows per buffer. The best way to speed up data flows is to design them properly in the first place.

23m. Does a demo using the Lookup Transformation component for type two SCDs. Uses the Advanced tab to change the query. Basically says that doing lookups like this is very slow since it has to do this every time for every row in the data flow (because it cannot cache every single row in memory).
Instead, he uses a merge join component against the lookup data set. Says you need to sort both the fact data and the lookup data for the merge join component. 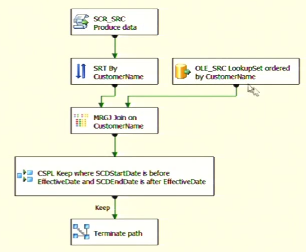 Because the lookup data is type 2, there will be potentially more records in our merged output he uses a conditional split component to remove those rows that don’t meet the predicates (ie where the effective date is between the startdate and enddate).

30m. Shows a demo about pulling in records from csv without parsing the file from the flat file adapter and instead of bringing in each row as a whole. This is undoubtedly quicker (especially if you had mostly duplicates and a very small subset), but you would still need to parse (and derive the columns).

In order to bring in each row as an unparsed row, I believe he used the “Ragged right” method (as below) which you configure in the Flat file connection manager. 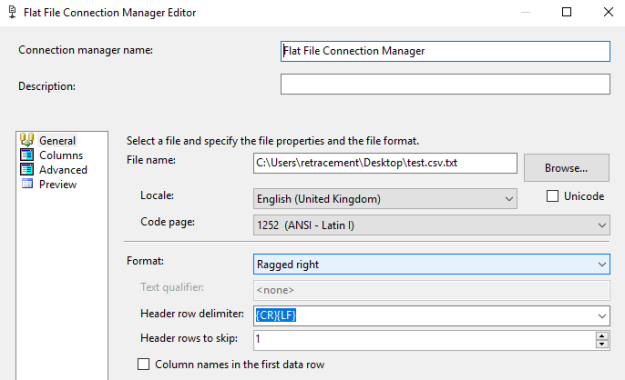 See the technique below for parsing the columns manually.

Never use the SSIS destination (think he meant SQL destination). It was put in SSIS 2005 as a quick way of putting data into SQL Server if the server you were inserting into was the same that you were running a package. There were some enhancements to the OLEDB destination made that effectively makes that always a quicker option.

45m. demo showing that sometimes splitting work over multiple components can be quicker than doing so over less.

50m. If data is in a trusted format, you can set the FastParse option to true on the output column which will act like a go faster switch particularly for things like dates. If the format of something is wrong it will cause and error when it is hit. This only works on the flat file source adapter.